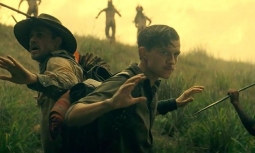 This is the story of Percy Fawcett, a turn-of-the-20th-Century military man turned explorer who, when posted to Bolivia as an envoy of the Royal Geographical Society, maps the region and discovers evidence of ancient civilisation.

Despite maintaining a consistent pace through its continent- and decades-spanning structure, the picture is imbalanced. In the opening scene, Charlie Hunnam’s protagonist is jovially insulted as “Grandad”, yet we soon learn that Fawcett’s outlook is anything but backwards-looking. He and his wife, played confidently and without fanfare by Sienna Miller, outwardly confess views considered liberal in today’s society, never mind that of 100 years ago. It feels like a clanging attempt at relevancy on the part of the filmmakers, and only serves to undermine the hero, as he spends the remainder of the film abandoning his family in pursuit of personal glory (the restoration of his family name, ironically).

Stylistically, Director of Photography Darius Khondji (Se7en, Amour) employs underexposure, a green hue, a whole lot of natural lens flare, and a propensity for soft focus which, together, create a very definite and watchable look, albeit one from which I can derive but a single meaning in the context of this film: Fawcett thinks only of the jungle from the outset.
Characters are largely under-developed. Even Fawcett’s right-hand-man (Robert Pattinson with an exemplary accent and equally-exemplary beard), chooses a final path which is both unpredictable based on what we know of his character, and serves only to highlight a flaw of Fawcett himself. There are also numerous cameos from associates of the main players who enter and leave the narrative with perplexing speed, their roles (aside from impacting the fortunes of Fawcett and his close circle) simply to move the story along. Parts of a river convoy which we never see are declared missing or captured on more than one occasion…scores of lives lost and all the viewer has to see for it is a line of dialogue revealing that some other people were once off-screen at an earlier point in the film.

And that is really the crux of this picture. It is not a depiction of a great explorer, his band, and their dramatic expeditions into the unknown. Rather, it is a slow-burning tale of one man whose personal convictions outweigh his internal conflicts, to the point of nullifying the drama at the very heart of them.