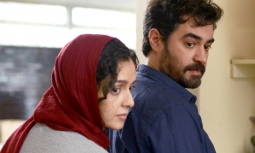 Featuring strong performances and a watertight script, The Salesman is the latest film from Asghar Farhadi, whose A Separation won the Best Foreign Language Film Oscar in 2012. This offering centres on a thespian couple who are forced to find a new apartment when their current abode starts collapsing, as the result of (presumably) unannouced governmental works.

The film is rich with symbolism: not only the foreboding subsidence, but the play within the film -- Arthur Miller's Death Of A Salesman -- offer strong metaphors for the plight of the protagonist, Emad, and his wife, Rana. After the pair find temporary accommodation thanks to an acquaintance working on the play, Rana suffers a harrowing episode, setting in motion a series of events that lead to a riveting, and yet wonderfully downplayed, final act. This is realist filmmaking of the highest order, and comes supremely recommended.