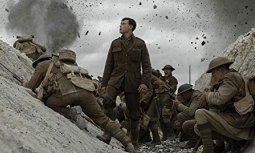 Writing this the morning after watching, the film has stayed with me, emotionally, which is always a good sign. Walking out the cinema I had to steady myself as I was put in mind of great uncles and aunts who never lived past 1918 or 1945. I had spent a great deal of the film leaning forward in anticipation.  Technically, the film is a marvel...I mean, it's possible they shot the whole thing on a drone, but I very much doubt they did. Look out for [SPOILERS] the burning town at night - the highlight of cinematographer Roger Deakins' and team's work. Performances from the central characters are spot on (Schofield particularly evolving over the course of the quest), whilst they intermittently bow to cameos from a bunch of recognisable faces of British TV and cinema. It really is a thrilling watch, and I'm sorely tempted to go and watch it all over again.

It's not quite perfect however...[BIG SPOILERS]

The nature of the "one-shot" means that, unless every single movement of the camera is motivated by an action, you can't help but be taken away from the plight of the characters and, in a film like this, where the stakes are so high, it feels disengenuous to discount the characters like that.

A simple example: early on the camera dollies along from behind as they negotiate the crowded trenches. Their urgency is clear from their motivation and the crowds are an obstacle to that. However, as they detour around a crowd their pace doesn't relent, and yet the camera slips past in order to overtake and dolly from in front. We understand nothing more of their plight here...all that is happened is some choreography to allow the camera to reposition from behind the actors to in front of them. Perhaps I am being too harsh. Perhaps, in this day and age, as visual language develops and promo and online content becomes more prescient, this is acceptable. I, though, found a move like this to be a distraction. If the "one-shot" is so required, could not the crowd have hindered the pace of the characters more, forcing them to battle slowly through and thereby permitting the camera to catch and overtake them? Just a thought, but then the press of the throng could allow the camera closer, showing us the urgency on the faces of the characters as they barge their way towards their goal. The camera still overtakes, yet the movement is now motivated by the actions of the characters throughout...