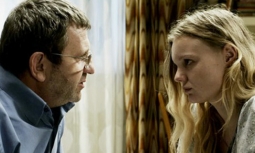 The latest realist feature from Romania's Cristian Mungui focusses on a father's attempts to mould a corrupt system, when his daughter's prospects of getting into Cambridge are damaged. Set against the backfrop of his failing marriage and stuttering affair, Adrian Titieni's protagonist is a highly complex character, utilising his position as a surgeon to get what he wants in a web of bribes.

It is an intriguing film, melding long static single-shot sequences with unsettling handheld sequences on foot. However, as the strands of plot resolve, I was left feeling a little underwhelmed, despite the morals at the heart of the piece playing out satisfactorily.