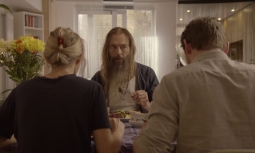 Suicide Feast, the debut single from Liverpool's The Vile Assembly, is released today. The song depicts society's desensitisation to the mammoth homeless problem on our streets and the accompanying video, which Mark shot in June, aims to compliment the track by portraying a Sunday afternoon in which a homeless man is invited to lunch by a charitable couple.