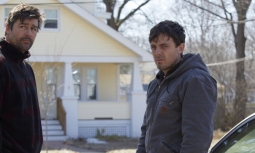 A truly fantastic film, where an accomplished script, stellar performances, and canny direction combine to produce a devastating yet heartening exploration of grief.

There is one tiny, miniscule thing I personally would change (a moment when the edit lingers on a long profile two-shot when my body screamed to know what the characters were feeling), but this is nit-picking of the highest order. I cannot fault it: Casey Affleck is the film's beating heart, forced to confront his deep-seated demons following a family death; Kenneth Lonergan, writer/director, takes us back and forward in time simply and without fanfare - much like the tone of the whole film - and the entire thing is rich with pathos, humour and heartbreak. One of the films of the year. In fact, one of the films, full stop.