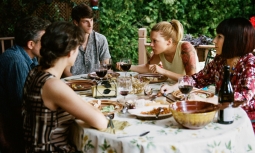 Shot in rude close-up, this is a cacophonous exploration of familial secrets and resentment.

It is an incredibly tense film; the set-up keeps the viewer hooked right through the protagonist's -- Louis's -- first visit ot the family home in 12 years. Through group and individual interactions, we unearth Louis's relationships with his subtly astute mother, his admiring sister and angry brother, as well as with his reluctant sister-in-law, who he is meeting for the first time.

The camera barely retreats from a big close-up throughout, giving the conversations an excruciatingly intense feel which is rarely suffused. At times the approach becomes a struggle for the viewer to endure, but I fear this is the point -- the tension doesn't so much simmer as scold.

The blocking is some of the best I have seen; Xavier Dolan keeping the framing tight without having to reveal every nook and cranny of a room or location. The over-the-shoulder framing on Vincent Cassel, in particular, is a stroke of genius; his brooding distance maintained until the explosive finale. The focus here is squarely on the performers, and not one of them shirks from their task.

Add to this a score which ebbs underneath, rising in climax at the latest revelation, and you have a bewitching bruiser of a film.