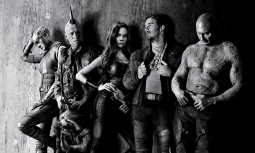 A second outing for the wise-cracking antiheroes of the Marvel universe. This time around, the unanswered questions of Quill's heritage are dealt with, whilst the characters of Rocket and Nebula are afforded screentime to establish their motivations.

It is as fun as ever, with visual set pieces built around Vol.2 of Quill's mixtape. But it doesn't deliver like the first instalment - lengthy wordy segways on the journey mean this feels more like a stopgap to whatever grand finalé Marvel has in store for its bloated universe and its many inhabitants.