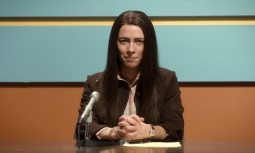 And so to Christine. Another biopic, this time centred on Christine Chubbuck, a local Floridian newsreader who, in 1974, [spoilers] committed suicide live on air.

Watching this back-to-back with Jackie, I was struck by how much greater an effect the central character (and performance of Rebecca Hall) had on me when compared to the former title. Certainly, I relate personally to the travails of Christine, and this is likely the main reason for my relatively higher levels of empathy.

I'm now a little stumped. It is probably a marked amount of research alone that will reveal the degree of subjection in my preference towards Christine over Jackie. But perhaps I can be objective in my appreciation of them...

Both films are well-shot period biopics, but there were specific filmmaking elements of Jackie which I took an aversion to, over-and-above the distance I felt from the protagonist. Christine, by contrast, engrossed me thoroughly; I exited the screening with a deep empathy for the character, and without any gripes with the ways in which the film was presented. Indeed, there were techniques employed which enhanced my enjoyment of the film, particularly the small details within the sound design.