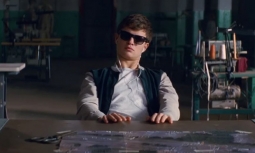 Edgar Wright returns with a very American crime caper built around a stylish soundtrack. Protagonist Baby is one last job away from paying back Kevin Spacey's crime boss, when things turn sour.

At times the film plays out like a music video, such is the integration with the killer score, resulting in the dynamic cutting for which Wright is now synonymous. And there is strong supporting work from Jon Hamm, Jamie Foxx and Lily James. The only real downside is the lack of focus on the female characters, who are not obviously afforded quite as much on-screen backstory.