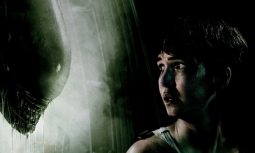 The Alien universe is reopened five years after the underwhelming Prometheus. This instalment is set years after that origin story, when terraformers explore the deeper reaches of space, and are distracted on their journey by a signal from an alien planet. Setting down to explore, they encounter...well, you can more or less imagine what they encounter.

Michael Fassbender takes the lead as the synthetic Walter, and there is able support from Katherine Waterstone and an ensemble cast thrown into the horrors of deep space exploration. Unfortunately, whilst there are moments of heightened tension and familiar tropes, Covenant never reaches the heights of the originals in the series, preferring to play it safe with some genre conventions and modern-day action sequences. The only character I particularly cared about was Amy Seimetz's Faris, but that is entirely because of her performance in Shane Carruth's Upstream Color, and nothing at all to do with the virtues of this film.